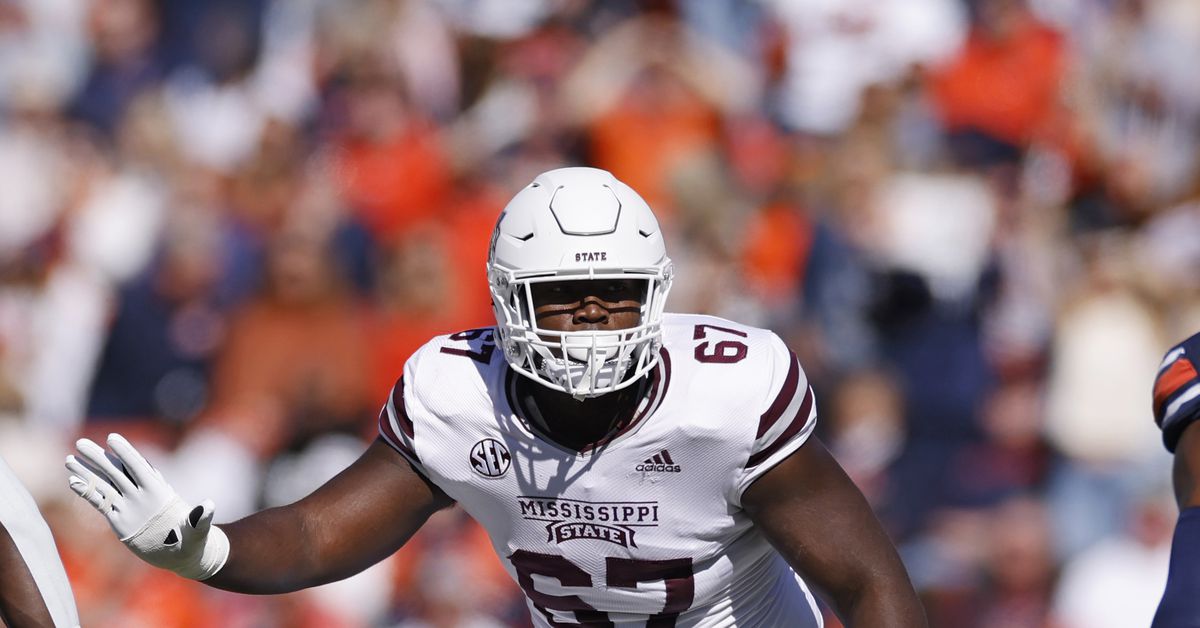 The Dallas Cowboys still have one of the most athletically gifted left tackles in the league in Tyron Smith, but his injury history has made the position a potential draft need for several seasons. Drafting for the future at tackle was a consideration for Dallas before they had a glaring hole at left guard, but they will still enter 2022 with Terence Steele replacing La’el Collins full-time.

Mississippi State’s Charles Cross is one of the Cowboys’ 30 visits before the draft, and his projections indicate what the team could plan for with the 24th overall pick. With mock drafts slipping Cross into the top ten, bottom of the first round, or completely out of the round, there’s little consensus on Cross’ ranking among other tackle hopefuls like Trevor Penning, Bernhard Raimann and Tyler Smith.

A two-year starter in the SEC, Cross wouldn’t help the Cowboys solidify inside the offensive line, but could be too valuable to pass up if he slips to 24th overall.

Cross is a naturally long tackle who plays light on his feet with elite mirroring skills. Keeping the rushers at arm’s length comes easy for Cross, who is 6’4” tall with a lean 307-pound frame. Taking long strides out of position, Cross stays over the defensive ends and gets into their shoulder pads to direct them.

Cross’s hand strength is well above average, allowing him to sit on blocks and not open up to counter moves. Relying on his initial punch and hip flexibility, Cross handles speed well on the edge and is a technician at resetting his stance to manage power.

As a run blocker, Cross gets off the ball quickly with open-field athleticism to dig up linebackers. Not a physical mauler who will impose his will in the ground game, he is a player who constantly manages his mission and has all the makings of a franchise left tackle at the next level.

Cross makes great strides in pass protection to define the edge, and is a fluid move with agility for his size, but can be slow to fire the ball and cross that kick slide. Although a rarity in cinema, defenders can take advantage of Cross’ straight playing style when he misses his initial strike. There’s a lack of finishing in Cross’ game that makes his willingness to play every shot a concern.

How fair that criticism is for a tackle that played in Mike Leach’s air raid offense against some of college football’s best defenses is the question NFL teams will be asking themselves. Cross’ below average three-cone and vertical jump numbers at the Combine match those shortcomings on tape, however. Dealing with pass rushers that combine speed and turn is sometimes difficult for Cross, who can get caught with a tight base, allowing defensive ends to win the leverage battle and turn the corner.

Cross is a pre-draft visitor for the Cowboys with household names Zion Johnson and Kenyon Green, who can step in immediately at left guard. The two prospects have been tied to Dallas for months because of it, but those early showings also knocked Cross out of the picture well ahead of Dallas’ 24th pick.

If there’s a chance Cross is still on the board, the Cowboys are doing their due diligence on a tackle that could not only fill the role of best player available, but also a long-term need at the position.

Getting the starter of the future behind Smith and Steele as soon as possible should be a priority for the Cowboys. It’s hard to say they’ve done enough this offseason for that first-round priority to land, especially if their best chance at Cross improves. The physical mold, Test numbers and reps against top competitors are all in line for Cross as a top prospect who plays with remarkable consistency.

Teams will often use 30 visits to add depth to their chart, gauging a few top prospects who are far from available. This gives a clearer picture of the extent of each position group for potential starters, which the Cowboys might wonder if they pass on tackles early. Cross is a great scheme suited to the Cowboys’ current offense, blocking well in zone runs and in space. Any team in need of a tackle should be happy to see the Mississippi State product still on the board.