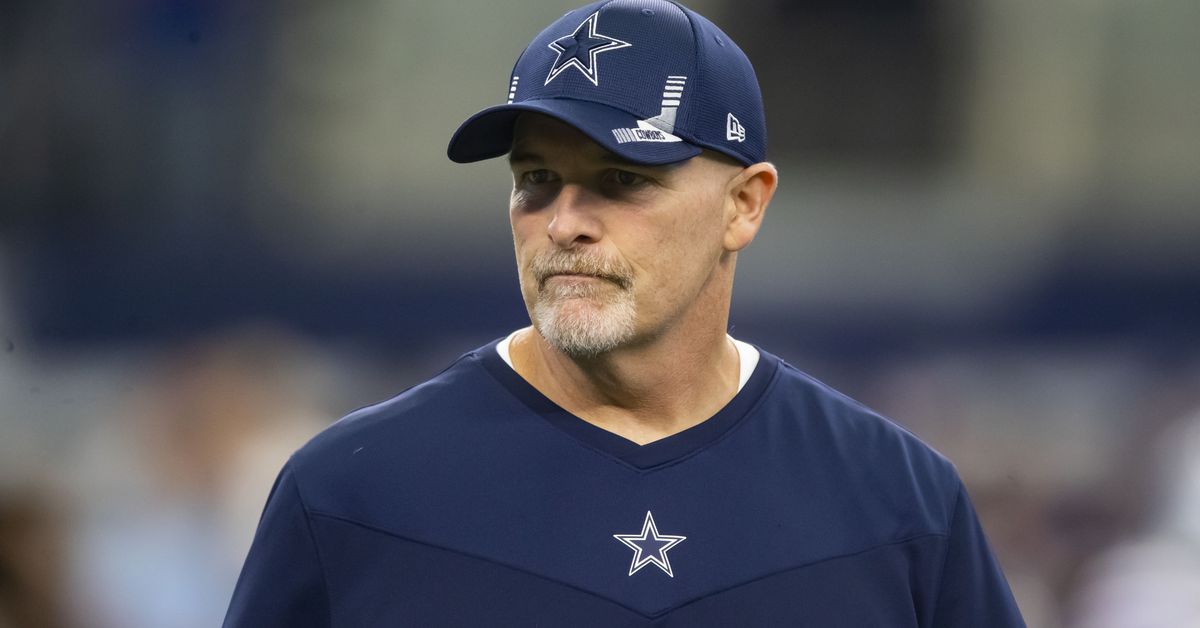 Quinn remains a hot commodity to fill one of the many head coaching vacancies.

The thought of losing defensive coordinator Dan Quinn this offseason is not a pleasant one. But now the New York Giants have joined the list of contenders, and losing Quinn to one of our NFC East rivals would be particularly unsavory for the Dallas Cowboys.

Quinn will speak with the Giants tomorrow after a busy week talking with other teams about their head coaching vacancies. Dan has met the Bears, Broncos, Dolphins and Vikings since the Cowboys’ season ended last Sunday.

As the former head coach of the Atlanta Falcons from 2015 to 2020, Quinn led his team to the Super Bowl in 2016 and another playoff berth the following year. He was fired mid-season after Atlanta started 0-5 in 2020.

Much like when he left the Seahawks in 2015, Quinn has made a name for himself again through his work as the Cowboys’ defensive coordinator. He took a historically poor defense from 2020 and had them lead the league in interceptions and near the top of the NFL in deflections, opponent completion percentage and passer rating among others. categories.

Add Joe Whitt to the list of coaches who may not be in Dallas next season.

Joe Whitt Jr., the team’s defensive passing coordinator and secondary coach, reportedly caught the attention of the Baltimore Ravens. The Ravens have requested permission to speak with Whitt about becoming their new defensive coordinator, according to NFL Network‘s Steve Wyche.

Last week, the Seattle Seahawks also asked to speak to Whitt about their coordinator position.

Whitt joined the Cowboys staff in January; he had worked with head coach Mike McCarthy and defensive coordinator Quinn before.

With Quinn now a highly sought-after head coaching candidate interviewing with several other clubs, Whitt could be a strong contender in conversation to take over as Dallas DC if Quinn leaves.

He said there were two coaching jobs he considered his dream gigs: head coach at the University of South Florida or defensive coordinator for the Dallas Cowboys.

McCarthy tries to clarify some of the growing uncertainty in Dallas.

Just to clarify, did you have a conversation with Jerry Jones about definitely coming back next year?

Mike McCarthy: “I mean, absolutely. We didn’t have — I mean, I’m moving full speed ahead. Our whole conversation, obviously, we talked about the disappointment of the game and the things that came into the game. But, you know, the majority of our conversation was about aligning all the positive things that we have and the how we move forward and the direction. We have things going on with our staff with both Dan [Quinn] and Kellen [Moore] with interviews. But, yeah, our conversations went – ​​full steam ahead. I get it…how some opinions are going, but at the end of the day, internally, we’re ahead at full speed. The exit interviews with the players have been phenomenal. Believe me, we are all very, very disappointed. … We all felt that what we accomplished in the regular season really set us up for a run in the playoffs. It’s a harsh reminder of how difficult it is to win these games, you know, because we didn’t play well enough to win.

Sean Payton leaving the Saints would be a miracle for the Cowboys – Braulio Perez, FanSided

With monster news from NFL insider Ian Rapoport that Sean Payton may not return to the New Orleans Saints next season, rumors are starting to fly about his future. Could he end up stepping away from training for a year? Or could he join a new team instead?

It goes without saying, but Jerry Jones’ face probably lit up as soon as he found out Payton might be leaving the Saints. Jones has long had admiration for Payton, so if he’s looking for a new job, could the Dallas Cowboys try to land him?

Sean Payton joining the Cowboys would make way too much sense

After losing to the San Francisco 49ers in the NFC Wild Card Round, the Cowboys are hoping to push for another dead-on-the-table Super Bowl. Ever since that final whistle, people have been tearing Mike McCarthy up and demanding that he be fired.

You already know that if Payton decides to part ways with the Saints, Cowboys fans will be begging Jones to come out and replace McCarthy with him. That said, we have to wait and see what Payton decides first.

DROY of the Cowboys expresses his admiration for his QB1.

Parsons told a heartwarming story about his arrival in OTAs. Prescott approached him when he was tired with his head down and told the rookie to look up and gave him words of encouragement. The linebacker complimented Prescott’s behavior and said the QB1 went to everyone individually after the loss to speak as a leader.

Micah Parsons on Dak Prescott after the game: pic.twitter.com/UoJmTYBXBV

That wasn’t the only story the young player shared. Parsons said Prescott went to his teammates after the game and asked everyone to contribute $500 to give to members of the practice squad. Practice squad players do not receive the same checks for playoff games.

Aikman continues to talk about the Cowboys’ 2021 season.

“Changing coaches is one thing, but you have to see how things go there. I talk to people in the building and from what I hear there is a lot of dysfunction,” Aikman said.

Mike McCarthy was criticized for not preparing the Cowboys for a home playoff game and claiming the team was “nervous” ahead of facing the 49ers. He coached the Cowboys to 12 wins, but with no playoff wins left the 2021 campaign nothing more than a squandered opportunity, not a rare sentiment in Dallas over the past decade. with some of the promising teams they’ve had.

When asked how he would rate McCarthy this season, Aikman had this to say.

“I think when it comes to Mike’s scoring, I think most people would probably say it’s a C just because you come into the season and that’s really what you’re going to do in the playoffs. “, said Aikman. “Fairly or unfairly, and I think it’s fair, you know, the expectations are certainly high for the team, and they should be. They’re a talented team.”