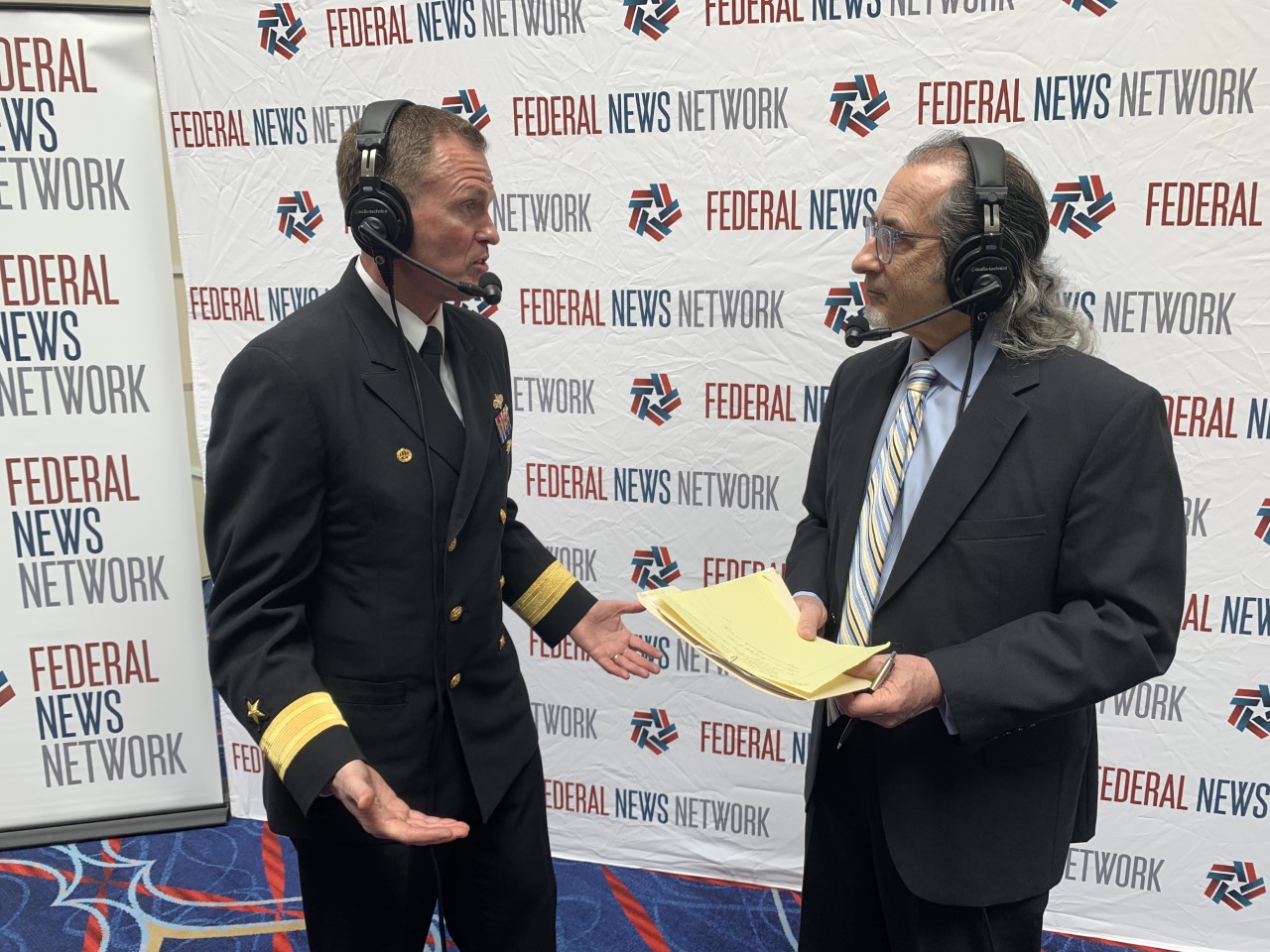 The best listening experience is on Chrome, Firefox or Safari. Subscribe to Federal Drive’s daily audio interviews at Apple podcasts Where Podcast One.

At the Sea, Air, Space conference this week, Federal Drive with Tom Temin met R. Adm. Ron Piret, who is Commander of Naval Meteorology and Oceanography, Navy Navigator and Navy Hydrographer. He described the 2,600-member operation that handles all of the Navy’s meteorological, oceanographic and meteorological observations and analysis.

Ronald Piret: The sea is a harsh environment, no matter what you embark on or where you come from. Ultimately, the environment and the sea get a vote. So our first effort is certainly that the fleet is operating safely. But it’s more than that, it really takes our deep understanding of the environment, whether it’s in the ocean, in acoustics, in ocean dynamics, or in the atmosphere and the electromagnetic spectrum, if you want, on how we optimize and then employ the fleet, regardless of platform. And that’s what we really want. Safety is the fundamental aspect, but we really assume that it is ultimately about the employment of the fleet and the lethality of the fleet.

Tom Temin: And you can understand how surface events, storms and the atmosphere will affect the surface of the ocean. Anyone who has ever seen the ocean understands this, how deep does it go? And how is this beginning to affect submarine operations?

Ronald Piret: We have a hashtag, if you will, really, that means it starts with us. And we’re really looking to characterize the environment from the seabed, the seabed, to the stars to the atmosphere. So one of the things we also do is map stars, that’s also part of understanding, positioning, navigation and timing. So that’s another aspect of what we do, in addition to weather forecasting and atmospheric dynamics, but also ocean dynamics. So when you think about things like anti-submarine warfare, you’re really talking about acoustics, how does sound travel in the ocean, and you really need to understand the ocean to understand that, frankly, but we have six survey ships that are forward deployed around the world, where our civilians are in various locations, and will conduct these types of military surveys around the world and in areas of ‘interest. And again, these are world-class, state-of-the-art platforms where we map and survey the ocean floor. And then we obviously share that with the broader DoD.

Tom Temin: And how do you interact with, say, NOAA, which also has surface ships doing a lot of measurements? And by the way, NASA also does measurements of the Earth’s surface and space measurements? There’s a lot of this gathering happening across civilian and DOD. How do you coordinate so as not to cross the same ocean floors?

Ronald Piret: I really appreciate this question, because I have one more title. And that’s NOAA’s naval deputy. So I actually work very closely with my counterparts at NOAA, because we have common interests in atmospheric modeling and observation. So we share a lot of data. We also help each other deploy and recover our unmanned systems. And so we have a really good partnership that, in terms of review, let’s say things like hurricane intensity and hurricane modeling. And so for the last three or four years, we’ve been collaboratively deploying ocean gliders to really measure the heat content in the Gulf, as well as in the Atlantic to better model hurricane intensification. And that’s just one aspect of what we do with NOAA and the National Weather Service.

Tom Temin: Now people have been measuring water, weather effects for centuries since man put this in place, and stars. But I feel like the collection of data and the amount of data and the fine-grained nature of that data is really accelerating now, isn’t it?

Ronald Piret: Absoutely. With the advent and use of unmanned and remote sensing systems, the amount of data we can collect and ingest is only increasing, really. And we’re actually, naval meteorology, and oceanography is in big data, we really ingest over 40 million observations a day, we take that ingestion into our models, and then we produce a forecast for the fleet. So, in fact, we also have a great relationship with the Defense Resources Supercomputing Center. And so we really have a close partnership, I’m sure they would like me to tell you that they have the 53rd fastest computer in the world. So that’s what the DoD and the nation really put into the fleet, frankly, and make sure we get the most out of it.

Tom Temin: We speak with Rear Admiral Ron Piret, Commander of Naval Meteorology and Oceanography, and what together is called Hydrography in your many positions. What is that? It is drawing water. It’s like a bucket. You draw water.

Ronald Piret: Really the science of hydrography and really mapping the bathymetry of the ocean floor. This is how we get to safe navigation. And so these ships that we talked about, our beacon surveillance ships, have multi-beam sonars that can measure the deepest part of the oceans as well as the shallowest part and coastlines. And then we can turn that into boundary conditions, if you want, for ocean models for dynamics and acoustics as well.

Tom Temin: And to be part of these 2600 people you supervise, what skills are you looking for? It sounds like a lot of math.

Ronald Piret: Absoutely. Certainly, we are always on the lookout for talented individuals, whether serving in uniform or in public service, from a science and technology, you know, engineering and math background. Ranging from physicists or oceanographers to geologists, we have the Navy’s only operational geology laboratory. We are also specialists in physics, optics, computer science, data management, the list goes on to include all types of engineering as well.

Tom Temin: And where does everything have its seat? Where all the big screens?

Ronald Piret: Well, we have a concentration, my command is based at Stennis Space Center there, the naval oceanographic office is there, as well as the naval oceanographic operations center is based there. We have Fleet Weather Centers in Fleet Concentration Areas in San Diego and Norfolk. And then we also have our supercomputing and modeling center, our fleet, our digital center and our meteorology and oceanography center in Monterey, California. And last but not least is the Naval Observatory, probably one of our oldest commands, which is on Observatory Circle here in DC, which is chartered with positioning, navigation, and timing, not only for the Navy, but for the Department of Defense as a whole.

Tom Temin: I reset my watch every time I pass by on Massachusetts Avenue, the big clock. Some questions. You mentioned the bottom of the ocean, how much is left, are there still areas to map and know?

Ronald Piret: There is still a lot of work to do. Frankly, if I told you a number, tomorrow it will be a little different. But you can safely say that after mapping by current standards, the best standards, no more than 20%. We have a lot of work to do in this area, but we also have a lot of partners around the world. We are also one of the member states of the International Hydrographic Organization headquartered in Monaco. We therefore meet with regional experts to determine their needs and how to share data between these organizations and these countries.

Tom Temin: And you mentioned that you also map stars. Is there still something to learn from Star navigation in our time?

Ronald Piret: You bet, right? Surely we’ve all gotten used to the usefulness of GPS. And like you said, you did it on your phone this morning. Well guess what? This time we’re an important part of national time powers this, which supports encryption that supports your Google Maps, you know, they got a lot of people at the conference today. And there is still a lot to learn. We are continually improving our timing accuracy and precision. Because it really fuels everything we do, not just in our daily lives, in reality and in war.

Tom Temin: So in that sense, NASA and the Space Force must also be interdependent enterprises, because they seem to see you up there?

Ronald Piret: Well, we have partnerships, certainly with Space Force and NASA. But again, we do star mapping on behalf of the DOD. So we share that information and have a lot of interagency stakeholders.

Tom Temin: And by the way, do they still teach stellar navigation in the Navy?

Ronald Piret: Yes, they do. In fact, I think at some point they thought, well, we have GPS, we have NASTAR, you know, we don’t need it anymore. But I think we’ve discovered that there are ways to degrade that ability. So celestial navigation is alive and well in all aspects of warfare. So once we get here, and we’ll probably take a look at the sun to make sure we’re aligned.

Tom Temin: So long division and star navigation still good skills to have.

Ronald Piret: There is no shortcut on the math app. We all face it.

Tom Temin: Rear Admiral Ron Piret is Commander Naval Meteorology and Oceanography and I spoke with him this week at the Sea, Air, Space conference at National Harbor.