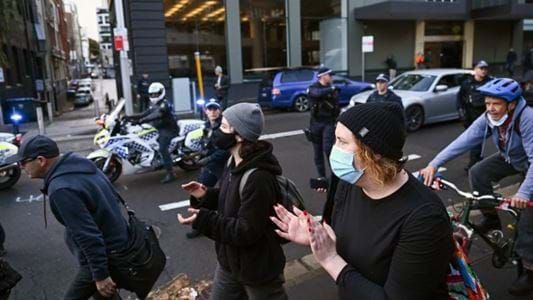 A protester stopped his car in the Sydney Harbor Tunnel, blocking traffic in the south lane until police arrived to remove it.

Plans for further protests were foiled by police on Wednesday, with Polair deployed with riot squads to avoid further disruption.

Police swarmed William and Palmer streets on Tuesday after reporting several protesters were crossing the intersection and blocking traffic.

Police arrested 11 people over the incident and several others managed to flee the scene before they could be apprehended.

NSW Police announced on Saturday that two further arrests had been made in relation to the incident, including two girls aged 18 and 19.

The arrests were made as part of Operation Strike Force Guard which aims to prevent and dismantle illegal protests.

The two girls were accused of willfully preventing the free passage of people or cars and of obstructing the way of drivers.

The couple are due to face Downing Center Local Court on September 1.